WANNA HAVE IT ALL? THE MONEY, THE LIFE, THE BUSINESS OF YOUR FREAKIN’ DREAMS? 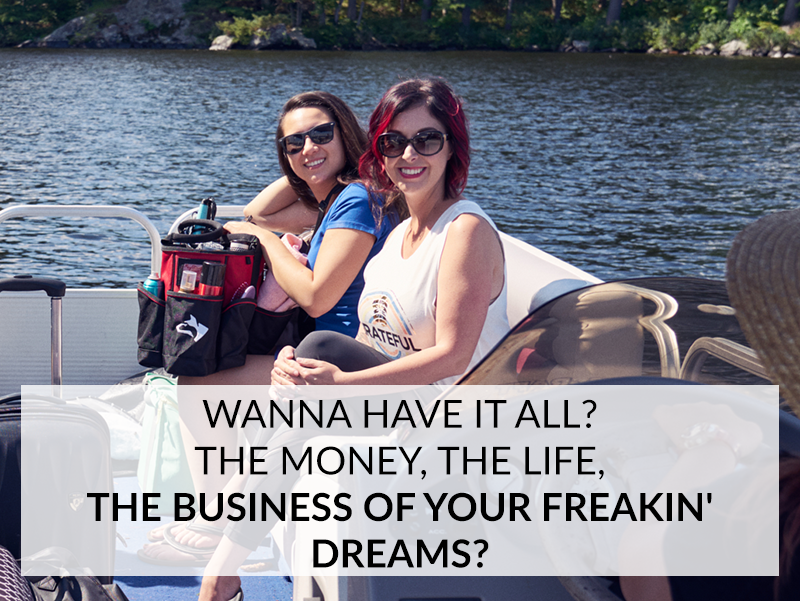 Stop complaining that “nothing is working” when YOU are the one that isn’t working.

Success? Guess what - comes from work. Comes from putting in the time, doing the actions, day after day, until they freakin’ STICK, and then on and on still.

Money? You want money? Cool… so why aren’t you asking for it then? Why aren’t you showing up every day and asking for the sale, promoting your offers consistently, telling people HOW they can send you money?

Hate to break it to ya (not really), but you will never have it all until you decide you’ll settle for nothing less and then you - yes - DO THE DAMN THING.

You work.
You show up.
You make it happen.

You keep going, even when it feels like it’s not working, you press on. Because that big break you’re hoping for? Is right around the freakin’ corner. It’s right there. You’re so damn close.

Don’t quit while you’re ahead.

The reason you don’t yet have what you want is not because it’s unavailable for you, it’s because you haven’t decided that it’s FOR you, right now.

Because let me tell ya –

Once you commit to something there’s NOTHING you can’t achieve. The insipired ideas you wait around all day for? They won’t come until you first commit.

This is your freakin’ LIFE. Are you sure you wanna keep living it the way you are now? Is this it for you? Are you done trying? Done growing?

I’m willing to bet not.. you’re clearly in the wrong place if you don’t always wanna be growing, exceeding your expectations, upgrading your life.

The truth is, for people like you, like me, like US, we’re never quite done. We’re always striiiiiving. Always working to hit that next milestone. Always doing SOMETHING.

Boredom is our enemy.

But! As much as you may do the things, do the stuff, show up every day and swing your arms around, you’re not doing the important shit. Not as much as you should be, anyway.

How much time are you wasting scrolling Facebook and Instagram every day? Too much, more than likely. (Don’t deny it! I know you.)

During a call with one of my clients today, she said she does all of the stuff she’s supposed to do each day, but doesn’t have time for the money work or sales activities.

“What the fuck are you doing then?”, I asked her. (Abrassive? Maybe. Necessary? Yep.)

She told me that she spent her day creating content and engaging with her audience.

We had a little chit-chat about asking for what you want.

If you don’t ask for it, don’t expect to receive it.

What you focus on and give attention to, that’s what will improve and get better and better.

So while my client was creating incredible content and has built up a huge community full of ideal peeps, she wasn’t making money (not as much as she wanted to be making, anyway) because she wasn’t giving it attention.

She wasn’t asking so she wasn’t getting.

She wasn’t commited to growing her sales/income (even though she said she was) because she wasn’t taking daily action on it.

You see how this works?

You see how EASY this can be?

When you commit to something, and you give it your ALL, it has no choice but to work out for you. But you can’t half-ass it. Use your whole ass. Put your WHOLE ASS into it, okay?

It’s the only way.