JUST DO IT YOUR WAY, HAVE FUN, ENJOY THE PROCESS, AND WATCH THE RESULTS HAPPEN! 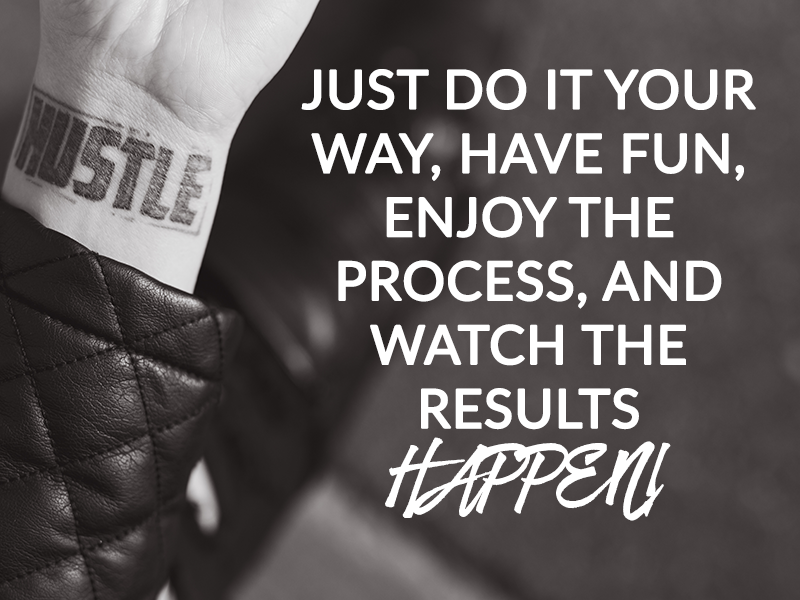 Another day, another email.

Sometimes I wonder how I’m able to keep doing this every day. How do I keep having something to say? Why do I keep hitting “send”, day after day after day? And more importantly, does it really matter?

The stuff that I say in these emails, that is..

And OF COURSE it matters. Of course it makes a difference. If not for anyone but myself. I’ve just gotta get the words out.

Every day I look at the blank screen, with the cursor blinking at me, like an angry child staring at me, demanding I hurry up and give them a cookie. If you’re not quick, someone might have a tantrum. (And it probably won’t be the child…)

So I see this blinking cursor every day. It taunts me. Tries to tell me I have nothing to say, and I should go away and do something else until I feel “inspired”. Have you ever done that? Not “been able” to write anything, and promise yourself you’ll go and do something to get yourself inspired and THEN you will write?

I have. And it usually ends with me not writing anything.

My point is: The reason I show up and say something every day, is not because I have something earth-shattering or important to share, but because if I don’t, I will lose the momentum I have built around writing.

Writing used to be so hard for me. I would struggle with knowing what to say (always trying to impress others by saying what I thought I was “supposed to” say, instead of what I really wanted to say). It would take me hours (sometimes days to write a blog post, and they were usually pretty short and not very good.

With my previous business, I even hired a team of people to write articles FOR ME so that I didn’t have to.

I thought I didn’t like writing, and that’s why I wasn’t good at it. And I figured, why waste time doing something I don’t enjoy? So I farmed it out. Got others to take the reins. Gave up my voice and let other people speak for me.

And what resulted from that was having a ton of pent-up anger. A ton of things left unsaid. A ton of resentment for these people that were “helping” me.

I realized that I DID actually want to write. I did enjoy it. But only if I could do it my way, which meant –

And that’s exactly what I started to do. And I haven’t looked back since. 🙂

But here’s the thing:

I thought it would get easier. It didn’t. Writing has never EVER been easy for me. It’s no longer hard, but it certainly ain’t easy. Sometimes that blinking cursor will only have a hold of me for a few seconds, and then I know what to say. Other times, it could take up to an hour of me trying to distract myself and JUST FUCKING WRITE, ALREADY.

My rule now is that I’m not allowed to re-read my stuff until after it’s already been out there for a few hours. Then, and only then, can I go back and check for any typos, grammatical errors, etc. The only thing I double-check before sending/posting, is that links work (if I’ve included any links in the post).

But to be honest, I rarely even do that.

I write and write and write until I feel complete. Sometimes I stray from my initial point at the beginning of the message. Sometimes the overall message doesn’t make any sense (in my mind, anyway). And sometimes all I can write is a paragraph, while other times I’ve written a 1,000 word post/email, and more keeps flowing out of me.

I’ve discovered that the amount of words you write doesn’t matter. What you SAY matters. And how OFTEN you say it matters more.

I made a commitment to myself that I would write every day, no matter what. Often, it’s a few hundred words. Sometimes much more, sometimes much less. But I’ve stopped judging myself for not writing “enough” or for writing “too much”, because who the hell decided how much “enough” was anyway?

And AS IF I would follow some arbitrary rule around how much I need to say each day.

The best way I know how to make daily writing a habit, and one that you keep getting better at, is to do it because it feels good. It feels therapeautic to get the words out. It feels like a complete RELEASE. Don’t write because someone told you to, or because you think it should be a priority.

Some people don’t enjoy writing and don’t get any pleasure from it whatsoever.

That’s okay. Writing ain’t yo thang. Maybe speaking is better. Maybe you prefer being on camera. Maybe THAT’S what really lights you up and makes you feel good. That could be how you communicate best.

I used to hate writing, but only because I thought I had to do it a certain way.

Now, writing is one of my favourite things to do, because I get to do it MY way, which is way better than everybody else’s way. 🙂

The point is that you need to show up and say something if you want your audience to listen. You can vocally speak it, or you can physically write it. Or if you’re extra talented, you can do both. Regardless, say what’s on your mind. Share what’s on your heart. The good, the bad, and the very, very ugly. I can promise you that if someone is following you, they want to know you –

And the good news about that?

It’s SO easy to share! Because all you’ve really gotta do is let people in. Speak out about what you stand for AND what you stand against. Give people a glimpse into your mind, or even into your home, through behind-the-scenes style content. Show people how you work, where you work, why you work. Let them know who you really, truly are. I promise you: They want to know.

You have a duty, and that duty is to get your message in front of every single person possible. The best way to do that is by showing up and speaking your truth on a daily basis. Repeatedly. Over and over again. Even if it seems like people aren’t listening, I guarantee that they are.

Do you want to change lives?

SPEAK UP! Tell us what you want (what you really, really want)…