How to manifest ANYTHING you want 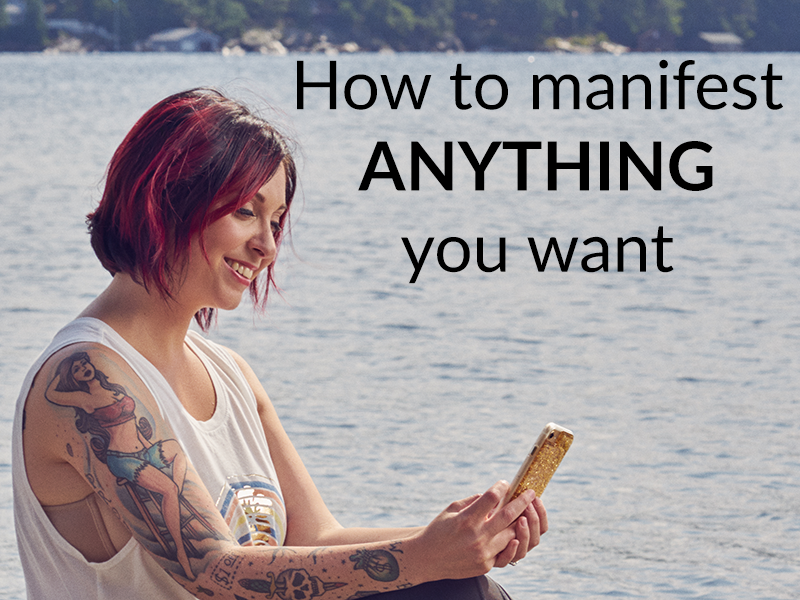 The funny thing about people is that they say they want something, but they don’t PROVE it with their actions, and so of course they don’t get it, and complain that “this manifesting stuff doesn’t work”.

Come on now. You didn’t really think that writing down a few affirmations in your journal each day was enough, did you?

You don’t really believe that in order to manifest, you just ask for something and then sit around and wait until you’re INSPIRED to do something to make it happen?

To manifest ANYTHING, there IS a process. You need to do a series of things in order to bring what you want to life.

It won’t just magically appear in your life because you asked for it or visualized about it one time. It comes because you know it’s already THERE.

ACTION is a big part of that process.

It comes when you decide and then take action.

Messy action that comes from being in your Feel Good Flow State.

You’ve gotta do stuff. And the STUFF is always “what feels good right now”.

- write a post on FB about a comment someone made, that I wanna rant about
- send an email to ______ about my 6-month program I think they’d be perfect for
- get my nails done because I want to feel like a boss lady and sexy nails makes me feel that way
- message my coach about my new sales page and ask for her feedback
- finish sales page & promote it
- connect with mastermind ladies and check in with how everyone is doing
- brainstorm the bonuses for my offer
- update my FB profile to include link to my new offer
- do a livestream on IG stories
- read at least 1 chapter of my book

You don’t need to PLAN your day. But you do need to follow what feels good.

You wake up, journal, create & unleash, because that feels good.

You then ask yourself “what do I want to do now?”, and then you GO AND DO THAT THING. And you keep asking the question.

You follow the feel good flow and you take that action.

Of course, if your “feel good flow” is saying “watch a movie”, and then “shop on amazon for 2 hours”, and then “eat cake for dinner” and then “scroll IG until your brain feels like mush”, welllllll..

Then you need to slap yourself silly and snap out of it.

This is laziness masked as flow.

I’m willing to bet that when you binge watch Orange Is The New Black, you don’t feel good while you do it.

Or when you realize, at the end of a 2 hour FB scroll-fest, that you just wasted 2 hours of your life.

Be aware of what you’re doing and don’t allow yourself to get stuck in the trap of doing stuff you know isn’t a feel good flow activity.

Do stuff that IS a feel good flow activity.

(You know the difference. It’s a completely obvious feeling when you’re doing REAL flow shit, as opposed to NON-flow shit, parading around in a flow costume).

It starts with you deciding what you want, asking for it, seeing it as already DONE, and then acting accordingly (that’s the action bit that is CRUCIAL).

Where the results come from? Is all of those 3 things, PLUS taking serious ACTION. You need all 4.

So if you still don’t have what it is that you want, take a look at what you’re doing every day.

Have you made the decision to have the thing that you want (a certain amount of money, a particular relationship, the lifestyle/business/love/freedom of your dreams)?

I mean, REALLY fucking commit to it?

Have you asked for it? Told the universe that this is what you now expect to have in/for your life?

Have you been crystal clear on exactly what that looks like for you?

Have you made that declaration? Truly seen this desire as a DONE DEAL instead of something that you will “one day” have?

Are you taking action EVERY DAY toward your desires?

Are your actions in alignment with what you want? (meaning - are you taking the RIGHT actions?)

And YES YES YES, it should feel good.

What DOES matter, however, is that you take action anyway, based on how you FEEL (unless the feeling is not to take an action, in which case, you ignore that fucker).

Some of my favorite questions to ask myself around this are:

“What is the aligned next action for me to take?”

“What action feels GOOD right now, that will get me closer to reaching my goals/having (my desired outcome)?”

There are no limits to what you can do and have in this world, only the limits you put upon yourself by not taking action toward what you want.

Decide that you’re ready to have it, now.

Decide that it’s already yours.

Decide that you will consistently take action toward it.

And the next thing you know?

You’re telling other people how you made it happen.